CSS3 transitions on properties which haven't been explicitly defined

While continuing to fiddle with the CSS and JavaScript on this blog, I noticed a rather strange behaviour whilst testing on Chrome, where the page would render differently, apparently at random. This turned out to be largely down to issues with JavaScript executing before or after CSS had been applied, but it's also shown up something unpleasant with CSS3 transitions, where it seems that the only thing consistent between browsers is that none of them do what you (probably) want...

First off, a very quick overview of CSS transitions for the uninitiated. These are a means of having smooth changes between styling property values of HTML elements, and are supported in modern browsers i.e. Chrome, Opera, Safari, and Firefox from 4.0 onwards. (Forget IE, not even IE9 beta supports them.) Here's a bit of sample code that animates a <div> when you click on it - the most relevant bits are in cyan.

Which you can see here:

The above example should work fine on all browsers supporting CSS3 transitions, on ones which don't the text will jump immediately to the alternate position.

I've coded an example that transitions the width of some text, as you might want if you had to make some space for a new element on the right hand side of the page. Unfortunately it doesn't play well within this blog, due to the use of position: fixed; breaking the layout, so instead you'll have to look at it via this link.

The somewhat crappy solution is to:

Not too bad in simple isolated cases, but I wouldn't want to do that amount of faffing around on anything complex.

I haven't looked at the official CSS3 spec to see what - if anything - is the expected behaviour in this sort of scenario, but the fact that we have browsers doing different things indicates that someone needs to fix something.

UPDATE: this is currently broken on my iPad, suspect it's iOS 4.2 related. I think I might be able to do a hacky fix, but I'm still working on it. It should work OK on regular Safari though.

It's probably not the most sensible thing in the world to publicize a >10MB video file that's being hosted on an Amazon EC2 'micro' instance, but let's see how long this lasts before I take it down to avoid too much damage to my credit card... 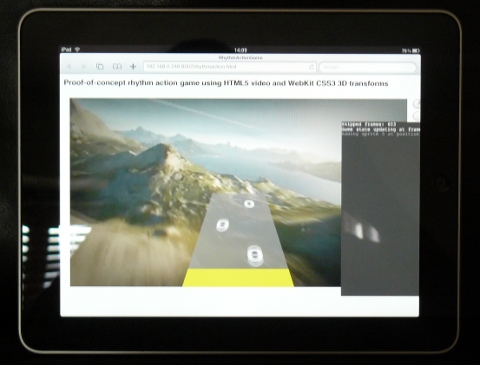 One of the things that surprised me when I got an iPad was that in Mobile Safari, embedded YouTube videos would play within the browser, rather than launching the standalone app as they do on the iPhone/iPod Touch. (Assuming that they've been embedded using the iframe method, rather than a Flash video.) This inspired me to start playing with HTML5 video, which previously hadn't struck me as that interesting.

Unfortunately, the embedding of YouTube video in an <iframe>, coupled with the way the underlying video file URLs are uniquely signed - presumably to inhibit hotlinking - means that it's difficult to impossible to have a lot of customized interaction with the YT video itself, but by hosting the video myself, I've able to build something really, simple but (hopefully) effective.

Anyway, at http://bit.ly/aRoq3V is a very basic rhythm action game. It's primarily aimed at the iPad, but will work acceptably on Mac/Windows Safari. Other browsers will have mixed results, as currently none of them support the 3D transformations added into WebKit's CSS, not even Chrome. The 3D stuff is super-simple, and could probably be 90% faked using regular CSS/JS/images, but as this is purely experimental, I've not been inclined to try. If this was a serious project, I'd probably do it in Objective-C, but I was really only interested in the HTML5/CSS3 aspects.

Tweet me to let me know how much you hate it...