I should probably have read the Hacker News thread first, but Christ, what an atrocious piece of buggy shit this is. How on earth it managed to get positioned as one of the top launch apps on the Chrome App Store, one can only guess at.

Running in Chrome 8 initially, I noticed that the pagination algorithm seems completely borked. Very minor resizing of the browser window causes the indicated number of pages for the story to randomly fluctuate - I think I managed to get the same article to claim to be between 1 and 13 pages in length, at least if the footer on the right is to be believed.

OK then, let's start advancing through this ten page story. The second page is fine - if rather text-heavy and image light - but the third page is slightly empty though...

Safari is unsurprisingly similar. What is a surprise though, is that this is as good as it gets.

Opera 10.63 just keeps kicking you back to the front page every time you click on a story link, whereas on Firefox you have a choice of illegibility or invisibility...

One can only imagine what further travesties might await were I to dare view it in IE...

Animation of newsprint reel change in SVG and JavaScript

Just been mucking around with SVG and JavaScript, and knocked out this fairly basic animation...

Something that's a tad annoying is that if you include an SVG file via an <img> tag, it doesn't seem to execute any JavaScript that it might contain - as such, I've had to resort to an <iframe> above. Whilst I can understand why an <img> isn't executed, it's mildly annoying - animated GIFs work, after all.

Just in case browser support does change, here's the SVG again, but this time pulled in as an <img>...

Anyway, this is all well and good, but I imagine that >99% of the people who might view this will have no idea of what this is supposed to be. In brief (?), it's a very simplified side-on view of how paper is consumed in a newspaper printing press.

To avoid having to literally "stop the press", each press tower can hold two (or less commonly, three) reels of paper. One of these reels will be "webbed up", and unwinds the reel to feed the paper into the press. Note that these reels can weight between 500kg and two tonnes, with - very approximately - 20 kilometres of paper on them, which takes around 20 minutes to be consumed when a press is running at full tilt. (Bear in mind that I'm referring to the specifications of the presses and reels at a place I used to work, and other print sites are likely to differ considerably.)

As one is about to expire, the other moves into position to take over. There's some clever mechanical/electrical engineering magic involving double sided sticky tape (no joke) and automated cutters, which I'm not going to mention further, as I don't know enough about it to speak with any degree of accuracy. The finished reel drops down into a bin below, for later removal to a waste area, and a new reel takes its place.

The SVG/JS code is pretty hacky, and could do with a lot of improvement; however this was primarily for me to have a proper play with SVG for the first time, rather than to produce something "professional".

The iPad is not the saviour of the newspaper business

There've been a couple of bits of (IMHO) crazy talk from UK newspaper execs reported in the past couple of days, that I couldn't let go without adding my two-penneth.

First off we have James Murdoch proclaiming:

Our flagship newspaper products are now the iPad apps.

Yeah, and the Titanic was the flagship of the White Star Line.

We then have Sylvia Bailey piping in:

Bailey looked forward to platforms like tablets and Apple’s desktop app store, “without the design limitations of the web”.

I just can't see why a consumer would pay for something where they can get the same thing at as high a quality for free.

Now, I agree 100% with that last comment. Thing is though, the iPad newspaper/magazine apps I've seen so far [1] don't actually seem to be much of an advance from their website equivalents - and in some aspects, they can be inferior, such as how rapidly their content is updated: 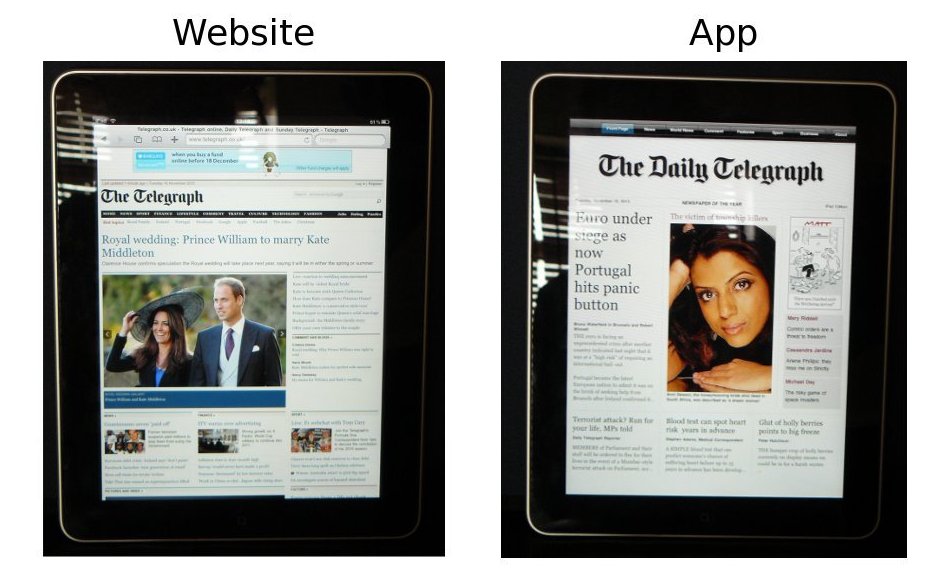 Whilst it's unfair to use a rival's products to critique someone's opinion, I think you'd be hard pushed to say that the Telegraph website shows has "design limitations" compared to their native app, quite the contrary in fact. Not to mention that if you're going to be comparing custom iOS (or Android for that matter) native apps to the web, then it'd be only fair to look at webpages built with CSS3, HTML5, AJAX, etc which aren't crippled by the need to support the likes of IE6.

Going back to the original JRM quote, surely the flagship product of a newspaper organization - for now at least - should be the newspaper itself? I haven't looked for recent figures for News International, but a couple of years ago, the printed product accounted for 85% of Guardian Media Group's revenues, and I'd be surprised if things are radically different now.

JRM talks about the "cannibalistic effect" of apps on the printed product, and I assume he's talking about that from a user/income point-of-view. But what about the "cannibalistic effect" internally? If your flagship is actually a niche product, then all the focus and attention it has taken away from the core business is more likely to accelerate than prevent your demise.

Not to mention, burning 20 million quid and several hundred man-years on these sorts of frivolities can't be healthy in an organization that's had to make fairly big cuts elsewhere.

Doubtless a year-or-so back, Steve Jobs did the rounds of all the big media conglomerates, using the notorious reality distortion field, to sell them on his "magic". Now, if you were in the desperate ruler of a declining kingdom, and a wizard came along saying that all of your problems would be solved if you had some of his magic beans, then it wouldn't be surprising that you bought into that fairy tale dream.

Personally, I'd be surprised if Steve Jobs has any more love in the interest in the publishing business than he does for the music industry. Selling the world a new type of device is/was a tall order, especially when apparently similar products had previously flopped. Who better to help spread the word than a desperate bunch seeking a saviour, but who still retain a good degree of influence and audience?

Footnote: I hasten to add, I've not actually spent much time with many iPad/iPhone newspaper/magazine apps. Those which I have seen I haven't found overly inspiring - they're either fairly basic text/image rendering that could be done just as well in HTML, or humongous archives of JPGs or PDFs pulled straight from the print version. I haven't checked The Times' Eureka app, which is supposedly quite good, but reeks of "mid '90s multimedia CD-ROM" to me, and we all know what happened to that line of electronic publishing...