Given the App Store's reputation for prurience when it comes to approving things, it's slightly eyebrowraising to find this delightful fellow in the iOS Unicode character set: 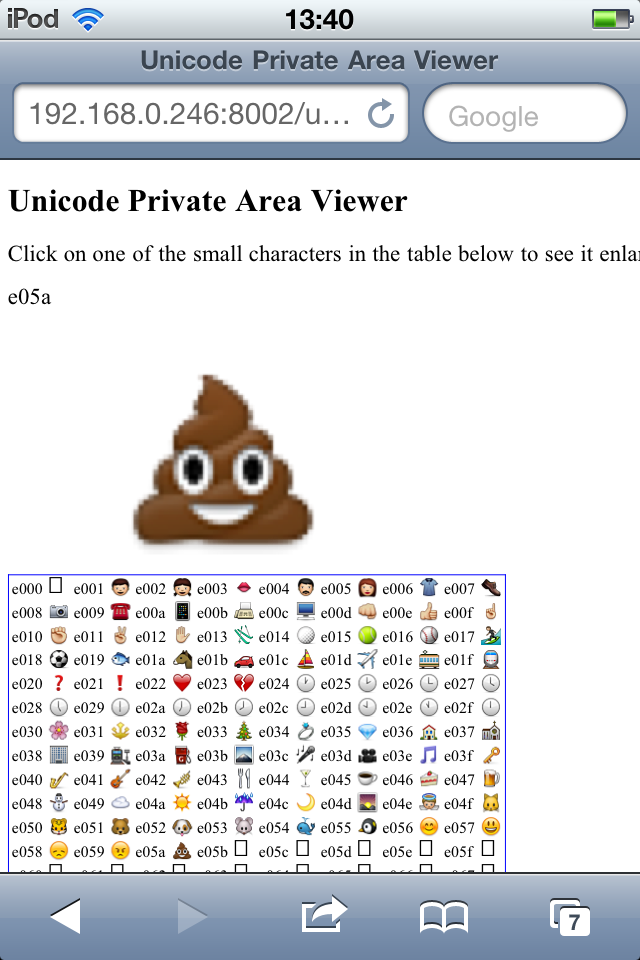 This came to my attention via this post on Asiajin, which is largely derived from this Japanese-language blog post.

I recalled seeing some weird colour bitmap icons hidden a long way down, when using UnicodeTable a while ago. Digging around again, it turns out that this is character 0xE05A in the private use area (PDF link), where vendors can - and do - put whatever they like.

On Windows 7, OS X Snow Leopard and Android 2.1, nothing seems to be defined for these characters in the default browser font. On Fedora, they are a mix of Asian (?) glyphs and dingbats; 0xE023 is a smiley with an eyepatch, for example. On iOS... well you can see for yourself in the above screengrab, or go to this link if you don't believe me. The character entity itself is , which will render as a placeholder box or similar on machines without a glyph defined for it.

For the past couple of months or so, I've been using the "Minefield" nightly builds of Firefox 4.0 rather than the "official" 3.6.x releases - 4.0 truly is an upgrade that merits the increment of the major version number.

It therefore came as a bit of a shock when I viewed this blog using 3.6.12 on my Mac - just about all the text was showing in an italic (or possibly oblique) typeface! My initial panic subsided when I confirmed that everything still looked as expected in every other browser, but this didn't get any closer to resolving the issue. Using Firefox's "Inspect Element" functionality gave no further clues, insisting that the text was in a regular font, despite the evidence in front of my eyes.

A quick hack-up of an HTML test file proved that I wasn't going insane, and that there is in fact a bug in Firefox 3.6: 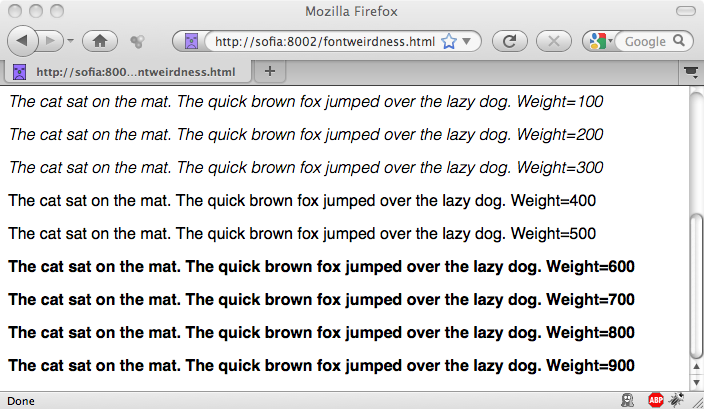 Some cursory Googling didn't find any reports of exactly the same issue, but this thread (started by no less than Jeffrey Zeldman!) covers similar ground.

I did try explicitly setting the font to be Helvetica Neue Light, but it transpires that Firefox ignores this, and requires you to use font-weight, which as we've just seen is broken - thanks a bundle...

As the bug seems to have been around for a while, and is fixed in the 4.0 betas, I don't hold out much hope of it being rectified in the 3.6.x releases. As a workaround, I've fallen back to using Arial for the headings, as does work correctly with the lower font-weight values.

TypeKit have recently posted a piece about font rendering in various browsers/operating systems that has inspired me to investigate something I'd noticed recently.

This blog uses Droid Sans for the headings. On Linux and OS X, this looks fine, as does Windows XP. On my Windows 7 machine however, it looks pretty horrible - the tops and bottoms of Cs are particularly bad, really jagged.

To work out why, I did rendered some test HTML using a couple of different fonts on several browsers. Here's an example, showing (from left to right)

The four lines of text are. in turn:

(There's no difference between IE9 beta and Firefox 3.6.11 on Windows 7 in the image above, that I can see, but apparently they should be using different rendering technologies.)

The root cause turns out to be the different font rendering technologies used in various versions of Windows:

It's not an issue with sub-pixel rendering per se, as Mac OSX uses it - but it looks like OSX is much more subtle about how it does it.

Arial looks better in Win7 with ClearType on, as does the Windows "system" font, so I wonder whether there's an issue with hinting, and/or font designers tweaking fonts to best cater for the underlying font technology?

On other thing that might be worth mentioning, if you're playing with the font rendering in Windows, various browsers react differently when you change the settings: